Janine Jackson interviewed True North Research’s Lisa Graves about attacks on the US Postal Service for the July 17, 2020, episode of CounterSpin. This is a lightly edited transcript.

Janine Jackson: One congressmember said it would be “a stunning act of sabotage” if the new head of the US Postal Service is allowed to push through major changes. Big Trump donor—surprise—Louis DeJoy issued a series of memos, disclosed to the Washington Post, calling for significant operational changes, including restrictions on overtime that many, including the Postal Workers Union, contend would slow down mail delivery, at the same time as Donald Trump holds up crucial pandemic support for USPS, contingent on it making steep price increases. “Sabotage” starts to sound like quite an apt description.

But what we should know is that this direct attack on the Postal Service, while it may be felt especially acutely during a pandemic and an election in which the most reasonable response is voting by mail, is absolutely nothing new, only the latest iteration of a decades-long assault on the US Postal Service, featuring some characters and some ideas with which you might be, unfortunately, familiar.

Lisa Graves is executive director and editor-in-chief at True North Research, and author of the new brief, The Billionaire Behind Efforts to Kill the US Postal Service. She joins us now by phone. Welcome to CounterSpin, Lisa Graves.

Lisa Graves: Thank you so much for having me on.

JJ: It’s like the slowest daylight robbery in history, this effort to privatize the US Postal Service. Something about a federal agency that serves everyone, and doesn’t make rich people a lot richer, just galls the heck out of some people. We can’t cover every minute, of course, but take us through some of the history and the key players in this effort. 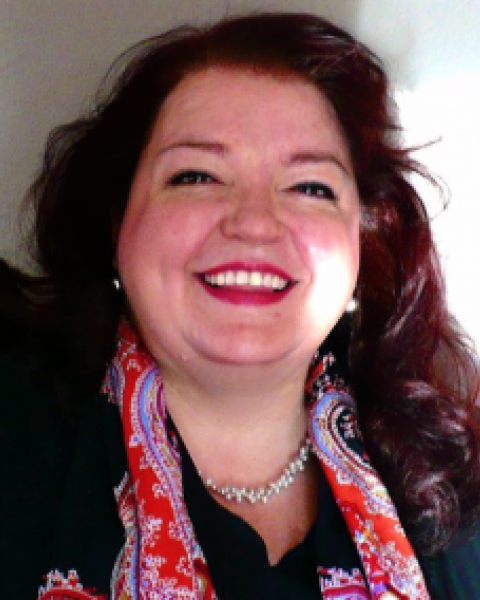 Lisa Graves: “”Charles Koch, who’s one of the richest billionaires in the world…has been staking efforts by people who have been working to privatize the Postal Service for more than five decades.”

LG: Sure. What we discovered in our research was that Charles Koch, who’s one of the richest billionaires in the world, and who leads one of the biggest privately held corporations in the world, Koch Industries, has been staking efforts by people who have been working to privatize the Postal Service for more than five decades, basically. So we traced the early funding of Charles Koch of the Reason Magazine and Reason Foundation, as it was working to popularize the term “privatization,” and specifically target the Postal Service for privatization. Also, after Charles Koch became the biggest funder of the Libertarian Party, its platform included direct abolition of the Postal Service.

Then in the ’80s, his right-hand man went on a commission, set up by Reagan, that also called for the privatization of the Postal Service. His group then brought on board the Reagan administration official who was behind that, a guy named James Miller, who continued to push for postal privatization through the ’90s.

He was rewarded with a position on the Postal Board of Governors during the George W. Bush administration, pushed through in part by Susan Collins of Maine, and then he used his post as the chairman of that board to push through this effort in 2006 to saddle our Postal Service with extraordinary, unprecedented debt, to pay future retiree health benefits 50 years into the future. And that debt has really been a huge obstacle for the Postal Service over these past several years, and including its current book.

And so you have a multi-decade campaign, fueled by Koch men, to privatize the most popular government agency, the one that serves more people than any other agency in our entire government. And now, with the help of Trump and his political appointee, Lou DeJoy, trying to make the Postal Service less effective, we have a combination of forces that puts our Postal Service at grave risk.

JJ: I wanted to draw you out on one part, the Postal Accountability and Enhancement Act, because we often hear in the press that the problem is the Postal Service just can’t compete with UPS and with FedEx; but that is part of the reason that folks call this a manufactured crisis. But it often appears, if it appears, as an allegation of some critics, or somehow it’s just a minor part of the story. Can you just talk a little bit more about that pre-funding requirement?

LG: Sure. This pre-funding requirement was imposed after other George W. Bush insiders looked at privatizing the Postal Service, and felt that having potential future liabilities would be an obstacle to privatization. So the next thing that happened was that James Miller pushed through the Congress this effort to move that debt, or that potential future debt, into a fund. And what it did was take enormous sums that the Postal Service had in savings, put that into that account, and impose a nearly $5 billion payment each year for those future liabilities. It was really designed to make the Postal Service more attractive to privatization.

And Susan Collins helped instrumentally with that, along with Mitch McConnell, who strongly supported James Miller’s appointment to the Postal Board of Governors.

And so you have the person who’s now at the helm of the Senate, who’s in the position to do the right thing by the American people, and by people in cities and small towns everywhere, to save the Postal Service. Instead, you have someone who has worked behind the scenes to aid this effort, to weaken our Postal Service.

No private company and no government agency has any such requirement of that sort of future funding, or to carry that liability on their books. And taking away those assets of the Postal Service deprives it of additional liquidity, to help it to modernize its fleet, for example, its postal trucks, to have them be more fuel efficient, to be modernized.

And so you have a situation here where this Postal Service is the backbone in many ways of key parts of our economy, of the chains of distribution in our country, the processing of hundreds of millions of pieces of mail, things that cannot be substituted by email, people’s prescriptions and checks and goods. In this pandemic, these postal workers have been on the front lines as essential workers, getting deliveries to neighbors everywhere in the country, and yet they’re being attacked by the head of their own agency, trying to deprive them of the ability to deliver the mail on time, as people expect.

JJ: Corporate media often convey, tacitly or explicitly, the idea that whatever it is, the private sector does it better, and whatever it is, government should be assumed to be messing it up. That’s the kind of assumption atmosphere, before you even get to the news. So, perversely, those who want a public service to stay public are seen as inserting ideology.

But who imagines that Charles Koch is putting all that energy into something that isn’t supportive of the ideologies we see reflected in his investments elsewhere? And part of that is not being a big fan of democracy. But it’s also—and it’s not often talked about—it’s also not caring about the particular human beings who would be hurt by eliminating the US Postal Service. And it’s not just the folks who rely on it, but it’s also the workers, right? 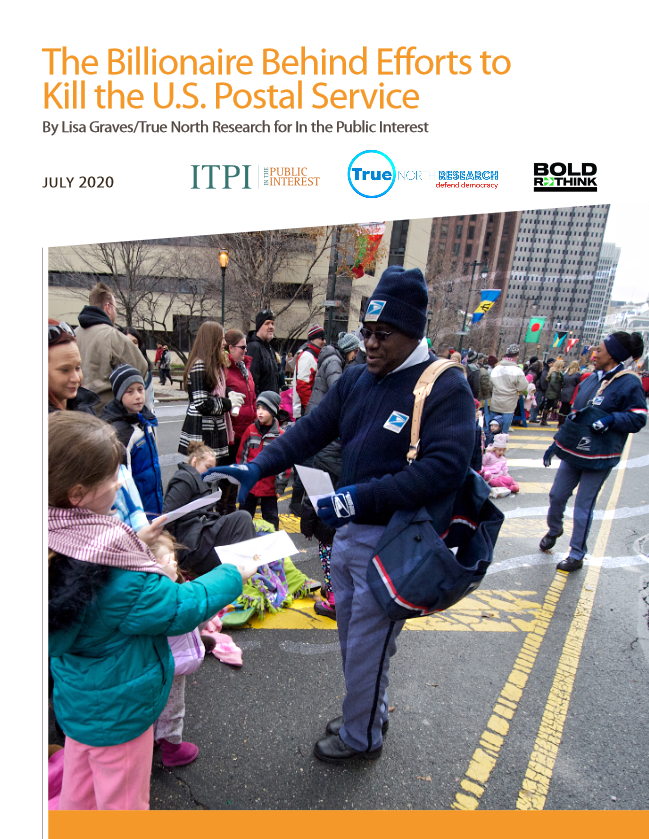 LG: That’s right; the Postal Service employs more than 500,000 Americans. It’s the second-largest civilian employer in the United States. And unlike Walmart, which is the biggest employer, the Postal Service workers aren’t subsidized with public assistance because of super ultra-low wages, like Walmart has paid its employees.

Instead, you have a workforce that is very diverse. In some cities, a significant portion of the workers are African Americans, like in Chicago. As a workforce that has 100,000 former military veterans that make it up, it has a tremendous track record. It is the most popular brand in America, and the most trusted government agency. And yet largely because one billionaire has put singular focus on the extreme privatization agenda, he’s been able to move that fringe idea from those fringes into almost domination within the Republican Party, unfortunately. And that’s at odds with a longstanding history of bipartisan, trans-partisan support for this vital public service that, in fact, the private sector can’t do better, would gouge us for, which charges so much more, as we already see in the prices charged, in my opinion, by FedEx and UPS for other deliveries.

JJ: And who aren’t incentivized to go all the way out on those rural roads, where the post office goes, just because that’s part of their job.

LG: Exactly, exactly. And so, many times Congress has spoken about the importance of the Postal Service as tying the nation together, making sure that every American, no matter how remotely they live, no matter how big the city is they live in, even through hurricanes like Katrina, through pandemics like this crisis, you have postal workers who have worked to deliver the mail, come rain or come shine, and make sure people’s mail both gets to them, and their ballots, for example, get to clerks of court. So they’re a vital function in our society, they should not be privatized. And this effort by Trump, by McConnell and others, to really move the Postal Service toward privatization is a fundamental rejection of this core institution that was actually named and created in our United States Constitution.

JJ: The American Postal Workers Union is fighting back; there’s a worker-led coalition, US Mail Not for Sale. What can folks do to be part of the pushback on this assault on the US Postal Service?

LG: I would really urge everybody to call every member of Congress, no matter their party, demand that they protect the Postal Service, demand the Postal Service receives some funds as part of these Covid relief measures. That it receive some ability to have some loans, and that it be released from this debt obligation that is unprecedented. I also think, quite frankly, that they should be asking for the resignation of the Board of Governors that approved Lou DeJoy for this position, because we need someone in charge of the Postal Service that is devoted to preserving it and expanding it as a vital public service. And also, when they’re calling and asking for support for the Postal Service, I’d ask them to repeal that 2006 Act, which also barred the Postal Service from offering banking services, or cafes or other services that would help make it stronger and more flourishing, and also is an undue cap on Postal Service activity that people may need and want.

JJ: We’ve been speaking with Lisa Graves of True North; they’re online at TrueNorthResearch.org, and you can find the brief, The Billionaire Behind Efforts to Kill the US Postal Service, on InThePublicInterest.org. Lisa Graves, thank you so much for joining us this week on CounterSpin.

LG: Thank you so much. It was an honor to be on.

CounterSpin from Fair.org republished from radiofree.org